To share your memory on the wall of Laurent Kerbrat , sign in using one of the following options:

Laurent “Finale, Maddog” Kerbrat was born April 2nd, 1948 at St. Boniface Hospital in Winnipeg, MB. He passed away on July 28th, 2020 at Eriksdale Hospital at the age of 72.
He was born to his parents Yves Ker... Read More
LAURENT KERBRAT

Laurent “Finale, Maddog” Kerbrat was born April 2nd, 1948 at St. Boniface Hospital in Winnipeg, MB. He passed away on July 28th, 2020 at Eriksdale Hospital at the age of 72.
He was born to his parents Yves Kerbrat and Christiane Kerbrat (nee Abgrall) and lived in the Metis Community of St. Laurent, MB since he was born. He loved to laugh and joke around and whenever possible he would throw in a little tease here and there. Since an early age Laurent had a love for hockey that grew over the years into a community involvement. He spent countless hours over the 35 plus years, waking up every few hours in the middle of the night and throughout the days to ensure that the ice was flooded and ready to go for the kids’ hockey season. With many sleepless nights and times spent “living” in the arena, every person in the town of St. Laurent and its neighbouring towns would agree that without Laurent, the hockey man, there would not be any ice. Which means, no ice, no hockey. His contributions and commitment to ensuring there was always ice gave him the honour to receive many awards over the years, with his biggest award of being inducted into the Hockey Hall of Fame for his outstanding volunteerism and pioneering nature in 2007-2008. Laurent met and shook hands with the hockey legend himself, Gordie Howe.
His charitable and kind nature always ensured that every kid who wanted to play hockey was going to play. His four children were heavily involved in multiple sports. He coached his own kids with baseball, ringette, hockey as well as reffing and umping. Laurent never thought twice about donating or paying for another child’s hockey fees. He made sure that all kids got whatever they needed-hockey fees paid or equipment they needed; such as a missing stick, no problem, skates need sharpening, he was your man, and he knew how to make them “just right”. Any kid who needed a ride to or from a game could always count on the “Maddog” to be of service.
After 30 years of service with Highway & Transportation, he naturally embarked on serving his community by becoming a Council Member for the RM of St. Laurent, MB from 2014 until his passing. During his Councilman-ship he worked on multiple portfolio’s with priding himself by ensuring that the seniors in the community were well taken care of.
Along with his passion for hockey and serving his community, he also had a great passion for his family, most importantly his grandchildren, whom he cherished from the moment they were born. Quality time was often spent by giving lawnmower rides to each and every child or grandchild as well as taking them skating after hours at the arena. One of his favourite pastimes was going for “rides” and taking the back roads to section-5 with his dear wife while enjoying the scenery. Laurent also enjoyed dancing, and he was such a smooth dancer that at the age of 24, he married the love of his life, the women who was always right by his side along his journey throughout all his accomplishments, Barbara Kerbrat (nee Hogue) on August 12th, 1972, who survives him. Laurent is also survived by his children; Hervé Kerbrat, Denise Dreger (Ryan), Ronald Kerbrat, Cindy Kerbrat and his grandchildren; Randi, Bowin, Scott, Delaney, Kenzi, Eva, Vanessa and Caleb. His great grandchildren; Mya and Kayne.
Laurent is predeceased by his older and only sister; Gaby Thioux (nee Kerbrat), his father; Yves Kerbrat, his grandparents, as well as many aunts and uncles.
A celebration of life will be held at a later date.
Read Less

Receive notifications about information and event scheduling for Laurent

We encourage you to share your most beloved memories of Laurent here, so that the family and other loved ones can always see it. You can upload cherished photographs, or share your favorite stories, and can even comment on those shared by others.

Plant a Tree in Memory of Laurent
Plant a tree 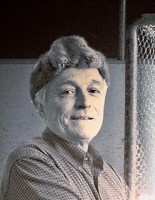