To share your memory on the wall of Helen Trick, sign in using one of the following options:

Helen was born in 1918 in the Tecumseh area to Jack and Ethel Sheldon, the middle child of seven. In her teenage years she met Richard Trick and they married in 1941, between his garrison duty in Jamaica and his deployment to Hong Kong. After Dick’s return at the end of the war, they took over his family’s farm and raised a family of three, while breaking land for agriculture and building a registered Holstein herd. Those were busy years looking after kids, livestock, a huge garden and farmyard, but Mom could always make time to sew and craft. She was an accomplished seamstress and made clothing for the family and herself, and sewed doll clothing, table linens, aprons, curtains, and many other items. She enjoyed baking, too, and we were the happy recipients of tarts and pies, cakes and cookies, puddings and other treats right up into her 90s.

In 1966, Mom and Dad relocated from the farm to the town of Stonewall where Mom continued her hobbies, adding gardening, bowling, bus trips and attending the United Church. She made new friends and saw more of her extended family, and many of them would gather at the Stonewall Chicken Chef each Tuesday for pizza. She also thoroughly enjoyed her time with grandchildren Leah and Rob, and spent many hours sewing for them, baking with them, reading to them, and letting them help her in the garden. After Dad’s passing in 1996, Mom was able to do some travelling with the family. She was 79 when she rode Space Mountain in Disney World and enjoyed taking cruises over the next several years. Those trips were wonderful opportunities for the whole family to spend time together and created memories that will last forever in our minds.

In 2003 Mom moved to Lion’s Manor and enjoyed closer ties with sister Doris, sister-in-law Glen, and cousin Ruth, as well as other family and many friends that she made. There were bus trips and bingo and card games and musical events and many other activities that kept her busy and it was hard to catch her in her suite. She thoroughly enjoyed the weddings of her grandchildren and spending time with her four great-grands. She celebrated her 90th, 95th, and 100th birthdays in style. Unfortunately, her health began to fail and she spent the last two months in Stonewall Hospital prior to her passing.

The family is grateful to Michelle Loehmer and the Home Care staff, who made Mom’s life more comfortable and enjoyable over the past number of years, and to the Stonewall Hospital staff, who were kind and attentive during her admission. Special thanks go to Audrey and Ken Klimpke, faithful neighbours and friends, and nieces Joyce Lyndon and Bernice Semeniuk who for many years helped Mom with shopping and getting to the Pizza Gang and other gatherings. Thank you too to the family and friends who were able to pop by and visit or who kept in touch over the years with calls, cards, or notes.

A Celebration of Life will be held at 2:00 on Saturday, November 30, 2019 at MacKenzie Funeral Chapel in Stonewall. In lieu of flowers, please consider a donation to a charity of your choice.
Read Less

Receive notifications about information and event scheduling for Helen

We encourage you to share your most beloved memories of Helen here, so that the family and other loved ones can always see it. You can upload cherished photographs, or share your favorite stories, and can even comment on those shared by others.

Plant a Tree in Memory of Helen
Plant a tree 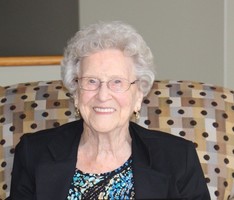