To share your memory on the wall of Gordon Valen, sign in using one of the following options:

Print
It is with profound sadness we announce the passing of our beloved father, grandfather, brother, uncle, nephew, cousin and friend Gordon Valen on July 21st, 2019 at the St. Boniface Hospital at the age of 63 years.

Gordon leaves to mourn... Read More
It is with profound sadness we announce the passing of our beloved father, grandfather, brother, uncle, nephew, cousin and friend Gordon Valen on July 21st, 2019 at the St. Boniface Hospital at the age of 63 years.

Gordon is predeceased by his parents Myrtle and Peter Valen, and brother Doug Valen.

Gordon was born September 24, 1955 in Stonewall, Manitoba. He later moved to Teulon, Manitoba where he settled to raise his family. Gordon worked in the transport industry since he was 18 years old up until his passing. In the span of his career he met many people in his travels and formed lifelong friendships from coast to coast.

The Family wishes to thank St. Boniface MICU Hospital Staff, Seven Oaks Dialysis unit, and Gordon's physicians and specialists Who provided excellent quality care to Gordon. In addition, the Family wishes to thank everyone who attended the hospital to be with the family during this time. A Special Thank you to friends past and present from his favorite place the Sun Valley Restaurant.

Prayers and a Celebration of life will be held on Wednesday, July 24th, 2019 at Teulon Rockwood Centennial Hall beginning at 7:00 pm.

Receive notifications about information and event scheduling for Gordon

We encourage you to share your most beloved memories of Gordon here, so that the family and other loved ones can always see it. You can upload cherished photographs, or share your favorite stories, and can even comment on those shared by others.

Plant a Tree in Memory of Gordon
Plant a tree 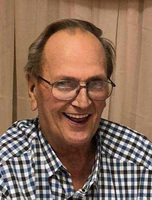