To share your memory on the wall of Garry Diell , sign in using one of the following options:

It is with great sadness that we announce the passing of our beloved husband, father, grandfather and great-grandfather, Garry (Pop) Diell after lengthy health issues. Garry passed away peacefully at the age of 76 with his wife Diane and his three children by his side.

He was survived by his wife Diane, one month short of their 51st wedding anniversary, as well as Dennis (Maribel), Pamela (Daryl), Lisa (Eddy), special mother in-law Winnie Johnson, grandchildren, great grandchildren, as well as nieces, nephews, many special family members, and friends.

Garry was born in Eriksdale, Manitoba but raised and lived all his life in Oak Point, Manitoba, working as most country boys do, on his parent’s farm. At a young age he quickly learned how to work with his hands and worked for the Hudson Bay Company building stores, as well as the local MMF housing, installing cabinets. In the winter months he worked as a commercial fisherman on Lake Manitoba, and then drove school bus for the White Horse Plains School Division. Many good stories and laughs were had in the family kitchen after returning from the lake in the wintertime fishing, as the coffee was always on, as the group would share a drink and discuss the days catch and the plan for the next day.

Health issues started in 1994, and in 2016 they progressed much worse. However, with the help of the love of his life Diane, he didn’t slow down too much while cutting grass on the riding lawnmower or pushing snow on the bobcat with his oxygen tank in tow! He always had a story to tell and a way to help fix anything and always had the necessary part in his huge garage no matter what you needed fixed. With a lathe, press, welder, pipe bender, and enough steel and other parts if he couldn’t fix it, he could make you a new one. Including the two bombardiers and six water irrigation pumps he made from scratch.

A special thank you to Andrew Skene, as well as the palliative care team, and home care nurses.

Cremation has taken place and there will be no public service due to Covid-19. Garry will be laid to rest at a private family service.

We love you and will miss your physical presence. You will forever be in our hearts.
Read Less

Receive notifications about information and event scheduling for Garry

We encourage you to share your most beloved memories of Garry here, so that the family and other loved ones can always see it. You can upload cherished photographs, or share your favorite stories, and can even comment on those shared by others.

Plant a Tree in Memory of Garry
Plant a tree 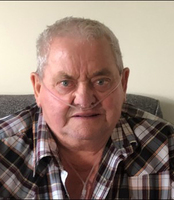