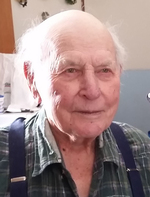 Peacefully, on February 16, 2021, at the age of 98, at the Arborg Personal Care Home, Walter James Charney passed away.

Walter was born May 17,1922 in a log home in Ledwyn MB to Gregor and Helena Charney. He was predeceased by his wife Louise (Eyjolfson). Walter was the last surviving of his siblings Francis, Mike, Kenneth, Luke, Olga, Sally, Joe, Louis, and Rosie. He will be dearly missed by his nieces, nephews, friends and neighbors, especially the Tymoshchuks and Lupkys.

Uncle Walter was a quiet, gentle, hardworking man. He was one of the founding board members of the Riverton Co-op, served on the Riverton Credit Union board as well as numerous local committees. In his early years he cut pulp, fished, freighted, and worked on threshing crews. Teaming up with his brother Louis, “The Boys” as they were known as, successfully built a mixed farming operation. After Louis’s passing Walter continued farming until he was in his early 90s.

A few years ago, health challenges necessitated his moving to the Arborg Personal Care home. Our family is grateful for the kindness and gentle care provided to Walter there.

Due to current Covid restrictions a family graveside service has taken place and there will be no formal celebration.