To share your memory on the wall of Ruth Demery, sign in using one of the following options:

Print
It is with great sorrow we announce the passing of our beloved mother and Baba, Ruth Demery, on July 12, 2019 at the age of 88. Ruth was predeceased by Russell, her husband of 59 years, in 2014.

She will be greatly missed by her children... Read More
It is with great sorrow we announce the passing of our beloved mother and Baba, Ruth Demery, on July 12, 2019 at the age of 88. Ruth was predeceased by Russell, her husband of 59 years, in 2014.

She will be greatly missed by her children; Lyle (Michelle) of Ottawa, Cheryl Sherrer of Swan River, Shelley Demery and Michele (Gerry) Chartrand of Winnipeg, as well as Gordon Lawson and family of Saskatoon. Also missing their beloved Baba are grandchildren Brendan, Nicholas (Victoria), Tyler, Justin, Liam, and Audrey, and special family friend Robin (Jason) Rankin, Elainna, and Caitlin. Ruth is also survived by Shirley (Albert) Wyborn, her sister, and Wilmer Demery, her brother-in-law, as well as numerous nieces, nephews, and great-nieces and nephews.

Ruth was born on August 8, 1930 and grew up on the family farm near Olha, Manitoba. She left home in her teens to work in Fort Qu’appelle, Saskatchewan and then in Victoria, BC before moving to Winnipeg where she met Russell in the spring of 1954. They were married on December 29, 1954 and lived in Winnipeg all their lives. Ruth had a love of travel and summers were spent on family car trips across Canada and the U.S. Her life was devoted to raising her family, although she also held various jobs in Winnipeg before retiring in 1993. After retirement, Ruth adored seeing and doting on her grandchildren, and loved staying in touch with extended family. She also became involved with the Main Street Seniors Centre and then Bleak House, where she continued to play a role until her passing.

The family kindly declines flowers and instead asks that a donation be made to a charity of your choice.
Read Less

Receive notifications about information and event scheduling for Ruth

We encourage you to share your most beloved memories of Ruth here, so that the family and other loved ones can always see it. You can upload cherished photographs, or share your favorite stories, and can even comment on those shared by others.

Plant a Tree in Memory of Ruth
Plant a tree 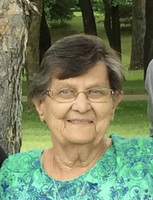