To share your memory on the wall of Rodney Jones, sign in using one of the following options:

Rodney William Jones passed away at his home on September 6, 2020 at the age of 61.
He was predeceased by his parents Cecil and Lil Jones and his brother Greg Jones.
Left to mourn his loss are his childre... Read More
RODNEY WILLIAM JONES

Rodney William Jones passed away at his home on September 6, 2020 at the age of 61.
He was predeceased by his parents Cecil and Lil Jones and his brother Greg Jones.
Left to mourn his loss are his children Dylan (Chelsea) and Bentley (Shawn), his sisters Val Schroeder (Henry) and Cindi Burak. His nieces Candy Skyhar(Wayne), Stacey Klippenstien (Adam), Amanda Schroeder, Cassidy Burak and nephew Brayden Burak. Also numerous great nephews and a great niece.
Rod grew up in Warren, Manitoba and graduated from Warren High School. He enjoyed many types of work, but he chose his career with the International Brotherhood of Boilermakers in 1981. His career took him to various places throughout Manitoba, Saskatchewan and Northwestern Ontario. He was very proud to be a boilermaker and enjoyed being part of the brotherhood.
“Roddy” as he was known by many loved the outdoors. He was always in his glory to be boating, quadding, sledding, camping, fishing and hunting.
He also enjoyed and participated in all types of sports but hockey and baseball were his 2 favorites. When his mobility was compromised, he became an avid TV fan.
In 1989 he married Joanne Lillies and they had 2 children – Dylan and Bentley. He was so proud of them both and loved them very much.
Rod had many struggles in his life with his health, but he never lost his sense of humour or his beautiful smile. He treasured his get togethers with family and he will be deeply missed.
We would like to thank all of his friends over the years that drove him to his appointments or helped him out at his home.
Memorial donations in lieu of flowers can be made to a charity of choice.
A private family interment has taken place.
Read Less

Receive notifications about information and event scheduling for Rodney

We encourage you to share your most beloved memories of Rodney here, so that the family and other loved ones can always see it. You can upload cherished photographs, or share your favorite stories, and can even comment on those shared by others.

Plant a Tree in Memory of Rodney
Plant a tree 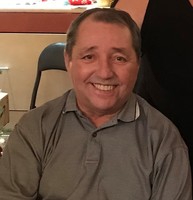