To share your memory on the wall of Ralph Tanchak, sign in using one of the following options:

Print
It is with great sadness that we announce the passing of Ralph Steven Tanchak at the age of 62. Ralph left us peacefully at the Stonewall Hospital surrounded by his three children.

Ralph was born April 3, 1957 in Fisher Branch, Manitoba... Read More
It is with great sadness that we announce the passing of Ralph Steven Tanchak at the age of 62. Ralph left us peacefully at the Stonewall Hospital surrounded by his three children.

Ralph was born April 3, 1957 in Fisher Branch, Manitoba, the son of Alec and Jean Tanchak. In 1978 Ralph married his dream girl, Patricia Arnason. They went on to have three children Jonathan Tanchak (Carolyn Morgan), Larissa (Michael) Higuchi, and Julianne (Bradley) Weaver. Ralph was Gido to seven grandchildren that he loved more than anything: Ariel, Nadia, Ryan, Rachel, Alexander, Messer and Elizabeth. Ralph also leaves behind a brother Garry (Carrie) Tanchak.

Ralph was predeceased by his father Alec and the love of his life Patricia.

Ralph was the provider and pillar of strength for his family. He was a good friend to many with his kind heartedness and silly humour. Hard working, he worked in the grain industry most of his life and later transitioned to his passion and amazing, self-taught talent of art, to include: painting murals, snow sculpting and caricatures.

A celebration of Ralph’s life will be held at 10:00 a.m. on Friday, May 31, 2019 at MacKenzie Funeral Home, 433 Main St. in Stonewall, Manitoba. A viewing will take place at 9:30 a.m. prior to the service. The funeral will be followed by the burial to take place at the Lundar Cemetery in Lundar, Manitoba.

In lieu of flowers, donations can be made to the Interlake-Eastern Health Foundation for Palliative Care at Stonewall Hospital.

A big Thank you to the amazing staff at Stonewall Hospital for their compassion and support during a difficult time.
Read Less

We encourage you to share your most beloved memories of Ralph here, so that the family and other loved ones can always see it. You can upload cherished photographs, or share your favorite stories, and can even comment on those shared by others.

Plant a Tree in Memory of Ralph
Plant a tree 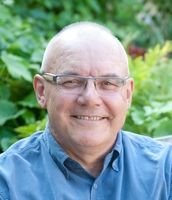