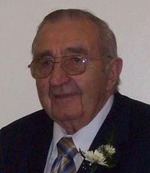 PETER OREST CITULSKY
Peacefully with his family at his side, on Tuesday, May 19, 2020, Peter Orest Citulsky, beloved husband of Jean passed away at the age of 89 years.

A private family interment will take place at Rivers Cemetery (service will be streamed at 3:00 p.m. on Monday, May 25th, at Citulsky.com).

Peter was born on Feb 23, 1931 son of Tekla and Michael Citulsky at Oakburn, Manitoba. He was raised at Seech, Manitoba and attended St John School. He helped on the family farm for several years before moving to Pettapiece to work on the CPR. On May 9, 1953 he married Jean Sworyk of Rapid City and after a short time living in Minnedosa, they purchased their farm in the Moline District, where they farmed until 1996. Along with farming he worked several jobs, but his pride was his years spent as a crop adjuster with Manitoba Crop Insurance. After leaving the farm they moved to Rivers for several years before moving to Portage la Prairie where he resided until his passing.

Peter was a member of and served on the executive of several organizations including, the Rivers Ukrainian Society, The Orthodox Church Brandon and Oakburn, Brandon Ukrainian Choir, Rivers Ukrainian Choir, and the Rivers Lions Club. He enjoyed his many years playing Tsymbala in numerous bands throughout the years and took extreme pride in recording 3 albums with the Citulsky family. He enjoyed curling, skiing, fishing, camping, golfing, gardening, traveling, and tinkering around the farm. His special times were spent with his family and especially his grand children his great grandchildren.