To share your memory on the wall of Myron Phipps, sign in using one of the following options:

Myron was born to Matthew and Lillian Phipps on October 16th, 1932 in Winnipeg, Manitoba.  Myron, his parents and older sister Francis lived on the family farm at Lilyfield until his father died in 1940.  The family moved to Stonewall where Myron attended school until he joined Manitoba Hydro in 1947 at the age of 15 as a labourer.

Myron married Margaret Rose Costello of Stonewall in 1957.  They had three children; Douglas, Wanda and Bruce.  Myron thrived in his career and was posted all over Manitoba until 1972 when they moved to Brandon, Manitoba.   His career with Hydro spanned almost 40 years and in 1986, he retired.  His final position was as Area Manager of Maintenance and Construction.

After 28 years of marriage,  Marg passed away in 1985.  In 1987, Myron married Emily (Buck) Isbister of Stonewall and became step-father to Lynn, Brent, Bob and Janet .  Emily and Myron lived predominantly in Brandon until their return to Stonewall in 2018.

After their retirement, Myron and Emily traveled extensively.  They enjoyed spending time with family and hosted many family events.  Myron and Emily were very involved in Knox United Church, Tourist Greeters, Crime Stoppers and other volunteer activities.  Myron loved to go walking and he and Emily were well known for their daily long distance walks.

He was Grandpa to Kyle, Sheena (Hudson) and Jared Phipps, Warren and Eric Truscott,  Taylor and Abigail Phipps, Blair and Bradley McDonald, Jake and Victoria Isbister.  He was Great Grandpa to Olivia and Sophie Hudson, Ava and Ella Phipps, Addison and Rowan Truscott, Ethan Phipps, and Kady, Lily and Henry McDonald.

He is survived by his wife Emily. Myron was predeceased by his step-daughter Lynn and granddaughter Sheena.  Internment and a memorial service will be held in the future.
Read Less

Receive notifications about information and event scheduling for Myron Phipps

We encourage you to share your most beloved memories of Myron Phipps here, so that the family and other loved ones can always see it. You can upload cherished photographs, or share your favorite stories, and can even comment on those shared by others.

Plant a Tree in Memory of Myron Phipps
Plant a tree 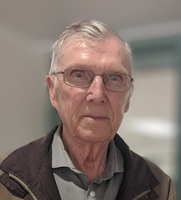