To share your memory on the wall of Jennie Zankowski, sign in using one of the following options:

On Jan 23, 1918, another baby, Jusefa Korchinski, (later known as Jennie), was born to parents Steven and Polly (Medlowski). She was the 7th child in her family of 12. Tragically her mother died when she was about 16, so it was her responsibility to look after her 5 younger siblings as well as run the household for her father and brothers. This taught her how to take on responsibility and work hard. These are qualities that she exhibited all her life.

At a dance in 1938, she met her soon-to-be husband Frank Zankowski and they were married on Sept 27, 1938 in Saskatchewan. Although they farmed most of their life, Frank started his job with the CNR in 1947. This left most of the work for Jennie and her kids. She was a wise and resourceful woman and kept her farm running while also helping many neighbours during harvest. She insisted her children help her which gave them all the resources to carry that into their adult lives.

The first two babies sadly didn’t live, but then came Pauline (1941), Edmund (1943), Dolores (1945), Melvin (1947), Gladys (1949) and lastly Evelyn (1952). By now the family had moved a few times and ended up in Deepdale near Roblin, MB. While there in 1956, sorrow struck when Edmund got sick with leukaemia and died. Mom was the kind of person who took what life handed her and she just soldiered on, however hard it was.
After Deepdale, Jennie and Frank moved to Sifton, MB and then to Dauphin where they both retired. In 1982 the couple decided to separate and Mom stayed in her home for many more years. She worked as a custodian in a school and then in St. Paul’s senior home. After full retirement, she decided to become Dauphin’s “perogy lady”, with her perogies being sent to BC, Toronto, and even the USA and supplying the appreciative crowds at Dauphin Fest. She also made the greatest holupchi, cinnamon buns, dinner rolls, and anything else anyone would ask of her. In her spare time, Jennie enjoyed going to bingo and bowling, and she did well doing both. She had a green thumb and planted a huge garden each year and never let an apple, raspberry or vegetable go to waste. She was composting long before it was fashionable / cool.

In 2005, Mom got worn out and decided to give it all up and move to Stonewall with Pauline. By 2014, Mom regained her health to a point where she could live on her own so she moved into independent living at St. Benedict’s near Winnipeg. Then in 2017, her health failed and she spent her last 2 and a half years at Middlechurch Home.

She is lovingly remembered by her children: Pauline Blue, Dolores and Joe Gozda, Melvin and Esther Zankowski, Gladys and Forrest Halpenny, Evelyn and Rick Bazylo. She also leaves 12 grandchildren, and 20 great grandchildren.

Be at peace now, dear Mom. We love you and will miss you. You were such a big part of our lives.

“Children, obey your parents in the Lord, for this is right. “Honor your father and mother”—which is the first commandment with a promise—“so that it may go well with you and that you may enjoy long life on the earth.” Eph 6:1-3

“For God so loved the world, that he gave his only begotten Son, that whosoever believeth in him should not perish, but have everlasting life.” – John 3:16 (KJV)
Read Less

Receive notifications about information and event scheduling for Jennie

We encourage you to share your most beloved memories of Jennie here, so that the family and other loved ones can always see it. You can upload cherished photographs, or share your favorite stories, and can even comment on those shared by others.

Plant a Tree in Memory of Jennie
Plant a tree 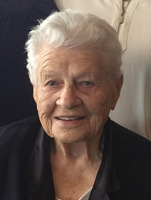