To share your memory on the wall of Ilona Rachev, sign in using one of the following options:

With heartfelt sadness our beloved mother passed away at Stonewall Rosewood Lodge July 17 just shy of her 96th birthday. Mom was born in Ujpetre and raised in Pecs, Hungary. She attended a strict Roman Catholic Convent and continued her education graduating with a Business Accounting Diploma. Mom met and married our father, Racho, after World War II. They endured many hardships while living in Yugoslavia, Italy, immigrating to Hamilton, Elmira, Ont., Winnipeg and finally settling in Stonewall in 1955. Working along side our father, who had his own veterinary practice, as a veterinary office administrator, she also raised her loving family. She was predeceased by her parents, Maria and Josef, both schoolteachers, her brother Josef, a soldier in the war, while she was in her teens. Her elder sister, our aunt Etelka, took care of her. Etelka, a schoolteacher, also married a veterinarian, our uncle Boris and both couples immigrated to Hamilton. She passed away in 2001.
Mom was a very talented piano player and played beautifully like her mother who taught music. Another exceptional skill was her impeccable penmanship.
Mom was a lady of her time and a wonderful mother who was loving, caring, compassionate and devoted to her family who meant everything to her.
She is greatly missed and mourned by her son, Dimitri, daughter Julia, grandchildren Kristina, Kristian, nephews Panko, Boris and their families.
A service will be held at a later date.
In lieu of flowers donations can be made to the Winnipeg Humane Society or to the Stonewall Rosewood Lodge.
Read Less

Receive notifications about information and event scheduling for Ilona

We encourage you to share your most beloved memories of Ilona here, so that the family and other loved ones can always see it. You can upload cherished photographs, or share your favorite stories, and can even comment on those shared by others.

Plant a Tree in Memory of Ilona
Plant a tree 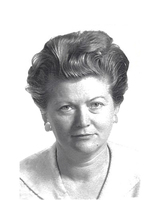