To share your memory on the wall of Harvey Bergner, sign in using one of the following options:

In his eternal peace Harvey will join many dear friends who were taken from this earth too soon, and include Albert Foster, Norman Eichel, Watson “Watsy” Robinson, Ed Petit and far too many others to name.
An obituary is a timeline of someone’s life, but that alone would not capture the essence of who Harvey was. His love for his family and friends, his struggles and the tenacity with which he faced them, his generous nature, his aspirations and accomplishments, his outgoing personality and sense of humour, are all an integral part of who Harvey was. Those of us fortunate enough to have had him in our lives, will reflect fondly on all those qualities that made Harvey who he was.

Harvey was born in Eriksdale, Manitoba September 9, 1931 and grew up on the family farm in Camper, Manitoba. Being the eldest, Harvey was more than happy to care for his younger siblings when not helping out with the farm work. As with many children raised in farming environments, a strong work ethic was instilled in Harvey; for the rest of his life, in whatever he did he personified hard work. Rather than sitting still in a classroom, Harvey opted to get to work and he did exactly that after finishing grade 9. He never regretted the decision and in fact decades later when reflecting upon his life’s work, he would grin and say “Pretty good for someone with a grade 9 education eh?” No one ever disagreed.

In his early 20’s he and a friend took a chance and purchased a dump truck. They were successful and worked for the provincial highways department. The partnership ended amiably and Harvey struck out on his own. One of Harvey’s first solo undertakings was harvesting Christmas trees and hauling them to Winnipeg to sell. Later, after securing financial aid, Harvey purchased his own trucks as well as a front end loader. He hauled lumber in the winter and in the summer worked in road construction as far away as Saskatchewan. In the late 1950’s Harvey relocated to Winnipeg and started Harv’s Cartage, offering top soil sales, landscaping, bulldozing and more.

In 1958 Harvey married Margaret Kolesar, originally from Neepawa, Manitoba. Their daughter Wendy was born in 1959. In 1964 Harvey learned of a business opportunity and ended up moving to Gypsumville, Manitoba. Bergner Equipment Rentals Limited was formed and Gypsumville would remain home for decades. Harvey’s son Sheldon was born in 1967. Margaret and Harvey went their separate ways in 1973, and in 1975 Margaret passed away. Harvey assumed the role of a single parent, and did so while continuing to own and operate his company. Being a parent at any time, under any circumstances, is always challenging. Doing so in a rural area, in a time before daycare, summer camps and after-school sports could not have been easy for Harvey, but his dedication and love for his children never wavered. He encouraged his children to work hard; moreover, he encouraged them to follow their dreams, wherever they may lead.

Harvey’s business flourished from 1975 to 1984 with a contract to haul gypsum to Winnipeg for Domtar. 1984 was important to Harvey for many reasons, but none more than his marriage to Patricia (“Pat”) Shabaga. His soul mate, Pat supported Harvey in everything he did. She never wavered and her love for him was as apparent at the end, as it was on their wedding day 36 years earlier.

Recognizing a good opportunity and a chance to use his decades of equipment and trailer knowledge, Harvey purchased an industrial building and lot in Winnipeg in 1986, and started Bergner Equipment Sales and Trailers (BEST). Harvey was one of the pioneers in what would become a burgeoning trailer rental industry, and once again his hard work and business acumen resulted in continued success. He combined the trailer rentals, with equipment sales as well as leasing of his industrial property.

In 2004 Pat and Harvey relocated to Stonewall, Manitoba and bought a home. Harvey, being a spry 72 at the time, continued working with BEST full time. In 2006 he sold BEST but continued managing his industrial building. Sensing yet another opportunity Harvey started a new business, CITI, in 2011 once again venturing into the storage container and trailer rental business. After continuing to manage daily operations at CITI as well as the industrial property for 4 years, Harvey sold the industrial property and ceased CITI operations in 2015. At 83 years of age he finally retired.

Harvey’s story would not be complete without mentioning his sense of humour, and his innate ability to make others laugh and smile. While still living on the farm Harvey’s mom once asked him why so many of the dates she used for baking were gone. Harvey smiled and responded “Well those are the only dates I can get!” Later in life Harvey still never failed to enjoy a good joke. For example, Harvey exchanged a novelty tin can of “BS” with his sister Irma for several years. Other times he would playfully lament that Pat never baked him pies; this led to some hilarious exchanges between Pat and Harvey. When getting a ride with his daughter-in-law, he would tease her that she had a lead foot, always with a big grin on his face. In later years Harvey started to have a morning coffee with close friends at a Salisbury House; during these sessions they would discuss any and all current issues, all the while offering their tongue in cheek solutions. With a humorous reverence Harvey began calling the Salisbury House the “House of Knowledge.” He continued his almost daily trek to the House of Knowledge up until the time his illness made it impossible.

Harvey’s passing will impact many, but none more than Pat, who shares the following verse in memory of him:

I have lost my
soul’s companion
A life linked
with my own;
And day by day
I miss him more,
As I walk
through life alone.

The family wishes to extend a special thanks to Dr. Venter and the other medical staff at the Stonewall Hospital for Harvey’s compassionate and professional care.

Harvey’s service will be held at the Stonewall Cemetery on Thursday September 3, 2020 at 2:00pm. Social distancing will be in effect and attendees are strongly urged to wear face masks.

In lieu of flowers the family asks that donations be made to CancerCare Manitoba Foundation (www.cancercarefdn.mb.ca).
Read Less

Receive notifications about information and event scheduling for Harvey

We encourage you to share your most beloved memories of Harvey here, so that the family and other loved ones can always see it. You can upload cherished photographs, or share your favorite stories, and can even comment on those shared by others.

Posted Sep 02, 2020 at 06:45am
Dear Pat and Family, on behalf of our family we send our deepest condolences to you and yours. Gary has very fond memories of Harvey as it was him that taught Gary how to drive “big trucks” as our kids call them. Gary was 19 years old and living in St. Martin. He worked for Harvey for 8 years before Gary moved to Winnipeg to drive truck and is still doing so today. Wishes he could be there. Take care of each other. Gary and Debbie Hoshowski.
Comment Share
Share via:
DT

Posted Sep 01, 2020 at 03:43pm
Just wanted to send my condolences to the family, especially Wendy, Brad and their daughter Brittany. While I didn’t know Harvey personally, I certainly heard all the wonderful things about him over the years. This has been such a difficult time for Wendy, since returning from down South a month early in February so she and Brad could spend more quality time with her father. Bringing meals, or groceries and then for the last six weeks visiting almost daily at the hospital and bringing him some homemade peach pie, coffee or his Earl Grey tea. She enjoyed just sitting and holding his hand or wiping his face and tearfully came to terms with the knowledge that the end was near. I’m so pleased she was able to say her goodbyes and felt her Dad was now at peace and in a better place. Rest In Peace Harvey and know just how much your daughter loved you back. Debby Tack
Comment Share
Share via: 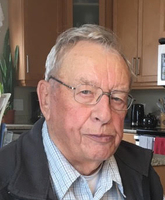