To share your memory on the wall of Harry Phillips, sign in using one of the following options:

With overwhelming sadness our family announces the sudden passing of our dear husband, father and grandfather on Tuesday, June 9, 2020.

With overwhelming sadness our family announces the sudden passing of our dear husband, father and grandfather on Tuesday, June 9, 2020.

Harry was born in Barrhead, AB and grew up in Edmonton. He graduated from Ross Shephard High School. In 1977, he attained a Heavy-Duty Mechanic license through the Northern Alberta Institute of Technology. In the early 90s, he took many computer hardware and software courses as well as accounting courses at Red River Community College in Winnipeg.

Harry and Karen met and married in Edmonton, AB. All the children were born there. In 1980, the family moved to Woodlands, MB. They currently reside in Clandeboye, MB.

Over the years, Harry had many roles in the transportation industry - heavy-duty mechanic at various projects in the Arctic, Syncrude in Fort McMurray and truck dealerships in Edmonton and Winnipeg. He was a long haul truck driver, Driver Recruiter, Safety Officer and most recently, Intermodal driver at Kleysen Group. For two years, he taught Drivers Ed at Oak Park High School.

The position Harry enjoyed the most were the years working for a facilities management company supporting the Canadian military in Afghanistan. Harry enjoyed the work itself, but he loved meeting the people from all over the world who worked at the base.

Harry had an eclectic mix of interests. He loved classic cars. It wouldn’t be surprising to find Harry at an antique car show and, given a silhouette of a car, he could tell you what it was and when it was made. He was passionate about his choice of vehicle and would express it freely, to the consternation and ongoing sparring with his children.

He was a Bomber season ticket holder for many years. He enjoyed spending time with his boys and their friends at every Bomber game and traveled with them to several Grey Cups the past seven years.

He loved music – classic rock & roll, some country and classical (especially if performed by his childhood friend, Dave Rhien). He also loved old time radio shows - and had an endless supply downloaded to memory sticks!
Harry loved electronics. His office was filled with bits and pieces from old computers. He would use the parts to build a working computer, which he would then give away.

He was at home on the water and happiest with a fishing rod in his hand. He enjoyed cruising on the pontoon boat, deep sea fishing, snorkeling and just sitting on a beach listening to the waves.

Harry and Karen loved to travel. Harry’s favorite places were London, England, Dubai, Istanbul, Turkey and Hawaii. Getting lost while traveling the back roads in the United Kingdom or Europe were often the highlights of a trip.

Most important in Harry’s life was family. His wife and kids were always a priority. He loved to attend the events of his children. Fishing, playing board games, watching a movie, working on a vehicle; if Harry was spending time with his kids, he was happy. His nieces, Gina and Tracy, had a special place in his heart. Harry’s love of family extended to researching genealogy and his love of travel allowed him the joy of visiting the homes of his ancestors in many places throughout Canada and Europe.

Harry was kind and generous in spirit and had an inside joke with everyone. His love knew no bounds. He will be greatly missed.

An outdoor Celebration of Life is planned for Sunday, July 12th at 11:00 am at the family acreage: 39 McAulay Road, Clandeboye, MB.

Anyone wishing to attend is asked to bring a lawn chair.
Social distancing applicable. Please wear a mask.

In lieu of flowers a donation can be made to the charity of your choosing.
Read Less

Receive notifications about information and event scheduling for Harry

We encourage you to share your most beloved memories of Harry here, so that the family and other loved ones can always see it. You can upload cherished photographs, or share your favorite stories, and can even comment on those shared by others.

Plant a Tree in Memory of Harry
Plant a tree 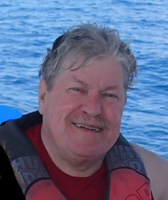