To share your memory on the wall of Freida Johnson, sign in using one of the following options:

Receive notifications about information and event scheduling for Freida

We encourage you to share your most beloved memories of Freida here, so that the family and other loved ones can always see it. You can upload cherished photographs, or share your favorite stories, and can even comment on those shared by others.

Posted Jan 29, 2020 at 05:21pm
Thank you for posting Freida's passing on Pembina Valley Online and CFAM. She was a deeply treasured friend of my mother Margaret Wieler of Winkler. After Mom's passing, I kept in touch with Freida in Mom's memory but also grew to appreciate her heart for serving! My deep condolences to her family. May you look forward to meeting her on the other side. Martha Klassen
Comment Share
Share via: 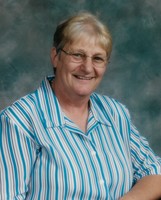