To share your memory on the wall of Einar Vigfusson, sign in using one of the following options:

Einar will be so very sadly missed and is survived by his wife of 47 years, Rosalind (Palsson)and their children Eric (Jennifer) and their children Nathan, Adam and Henrik; and Kristian (Jennifer) and their son Kallum Einar. He is also survived by nieces Paulette (Carl) Dingman, Pamela (Paul) LaPierre and Pat (Rick) Bonnett and their families. Also nieces and nephew in law Roxanne (Nordal) and Darcy Kozub, Greg (Pamela)Nordal and Natalie (Nordal) and Mark Klym and their families.
Einar was predeceased by his parents, Johann (1982) and Emily (1997) as well as his three brothers; Pall (2014) ( sister in law Bernice, 2011) Herman (2009) and Baldvin (1958) Also predeceased by his in-laws Johannes Palsson, Thor and Olga Johannesson, Baldur Palsson, Jona (Palsson) and Richard Nordal.
Einar was born on March 10th, 1933, the second of four sons born to Joe and Emma Vigfusson. He grew up on the family farm, situated on the banks of the Icelandic River. He was a man of principle and integrity; was intelligent, creative, humorous, loving, kind, honest, loyal and always championed the underdog.
He would describe himself as the quiet child, immersed in creation, inventing toys using various household items such as matchboxes, glue, string and spools. Einar had an amazing imagination and storytelling ability and when he was just a child himself, could often be found entertaining the younger children of the area with his stories and play acting. He attended school in Arborg and was an excellent student with an enquiring mind. He read voraciously and retained much of what he learned and as a result, he was a wealth of knowledge in many varied subjects. Post secondary education was not an option after completion of Grade 12, as money was scarce at the time.
In the 1970s Einar and his brother Herman completed an outreach course in Agriculture from the University of Manitoba and were both awarded their diplomas in Agriculture. In their younger years, they spent many of their winters working in lumber camps in the bush to augment the farm income.
However, farming was their main occupation and they were excellent stewards of their land; always taking great care in how they worked the land and never referred to the soil as “dirt.” The brothers farmed in a very amicable partnership until 2007 when Herman became ill and had to retire.
Einar was very community minded and spent several years on boards and committees including the Arborg Credit Union in its´ formative years and The Manitoba Pool Elevator. Many were the hand painted signs he donated and if community buildings were being built would give his help, freely.
Einar was extraordinarily artistic. In his teens and twenties he painted wildlife and scenery murals and pictures. In his early twenties he studied sign making and until computer generated signs became the norm, he painted most of the business signs in Arborg and surrounding areas, as well as names and numbers on trucks, airplanes and boats.
He had a great spatial sense and an amazing gift of proportion. These talents lent themselves well when he discovered the art of realistic wildfowl carving in 1984. Einar had an innate ability to instill a feeling of life in his carvings and this was often observed by visitors to the gallery. Carving became a very important part of his identity for the next 35 years. He completed his final carving in July of this year.
Einar was a very generous man and was happy to support many local fundraising causes which were important to him. He also donated carvings for auction to Ducks Unlimited for many years and in 2015, was awarded the prestigious Silver Teal award for his contributions. Prior to this he had received both the Pewter and Bronze award from Ducks Unlimited.
He was also very supportive of the Arborg and District Multicultural Heritage Museum and was glad to be able to do this through giving his carvings for auction.
He was very proud of his Icelandic heritage and could fluently speak, read and write the language. This opened many doors. He travelled to Iceland 15 times, sometimes to teach bird carving, and each time Einar and Rosalind returned from there, they had discovered even more cousins and had learned more about the land of their ancestors. It was a very special honor for him to be chosen to go to Iceland in 1999 as the International Visits Artist, where he mounted three shows of his work.
Over the next twenty years, hundreds of Icelanders on bus tours visited his farmhouse gallery.
He had a keen interest in genealogy and when speaking with visiting Icelanders, would often follow up a greeting with an inquiry as to which “clan” the visitors might be part of. Einar connected with many of his known relatives in Iceland and was able to keep in touch with several of them over the years.
Einar and Rosalind met at the Arborg Hospital in 1971 where she was nursing. They married later that year and happily began their life together. Little did they know that over the next 47 years, he would battle six different types of Cancer in his lifetime. But battle he did, with a positive outlook and a good outcome till 2019.
Our two sons are such a special gift to us. Eric, born in 1972 and Kristian in 1986. Their loving wives and children have added such a welcome dimension to our family
He loved his family so very much and loved spending time with all of us. His grandchildren were such a very special part of his life. Watching Eric and Jen´s boys play hockey was always an exciting outing. Watching little Kallum Einar, Kris and Jenn’s son, learning new things every day has been really wonderful!! This kind and gentle man has truly left us all a legacy of love and laughter. We will miss him forever.

May God keep you safe in His Care
Góða Nótt Elskan

The family would like to thank everyone who has been part of Einar´s care over the past many years. Very special thanks to Dr J.P. Donnelly and staff at the Arborg and Districts Health Centre for their loving and compassionate care over the past while. It is so very much appreciated by all of his family.

Funeral Service will be held at Ardal-Geysir Lutheran Church, 301 River Road, Arborg, Manitoba on Saturday, September 28th at 2pm. Pastor Courtenay Reedman- Parker officiating
Interment prior to the service at 1230 pm at the Arborg Community Cemetary west on River Road. All are welcome to attend.

Receive notifications about information and event scheduling for Einar

We encourage you to share your most beloved memories of Einar here, so that the family and other loved ones can always see it. You can upload cherished photographs, or share your favorite stories, and can even comment on those shared by others.

Posted Sep 21, 2019 at 12:20pm
Sorry to read you, immediate and extended family lost Einar Rosalind. We met he and yourself years ago at an art show @ The Downs. His wood carved items were amazing, my favourite the "black capped chickadee". Wishing you & yours the best going forward without Einar. Take care. Barry & Darlene Hood (nee Weeks/class of "65") See you in May 2020 Rosalind
Comment Share
Share via: 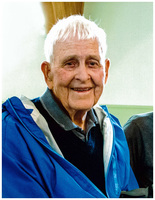