To share your memory on the wall of Edna Tarrant, sign in using one of the following options:

Print
On Sunday, June 7, 2020, Edna Tarrant passed away peacefully at home, at the age of 94, after a courageous battle with cancer, with family by her side.

Left to cherish her memory are her four children: Tracy, companion and caregiver f... Read More
On Sunday, June 7, 2020, Edna Tarrant passed away peacefully at home, at the age of 94, after a courageous battle with cancer, with family by her side.

Left to cherish her memory are her four children: Tracy, companion and caregiver for the past 18 yrs., Miles (Brenda), Tim (Carmen) and Terry (Hugh); grandchildren, Sara (Matt), Stacey (Dan), Ryan (Melanie), Ian (Laura), Kyle and Kelsey (Andrew); great-grandchildren, Payton (Tyler), Tennley, Knox, Ava, Finn, James, Connor, Jordan and Kaeden. There are numerous nieces, nephews, in-laws and friends. Mom will be missed by anyone who ever had the good fortune to know her. She was predeceased by her husband Ken as well as all her eight siblings.

Mom was raised and lived the majority of her life on a farm in the Gunton area until moving to Stonewall in 2002. After a few years in the Army, she and her sister Hazel opened a restaurant in Gunton called "Lee's Lunch" and their mother helped out there too. After marrying Ken, Edna worked hard operating a mixed farm, milking cows by hand, raising turkeys for a time, while raising four children. Mom was employed at Charison's Turkey Hatchery for several years as well as the Manitoba Vegetable Marketing Board.

After Dad's passing, Mom enjoyed sister trips to Alaska, Nashville, California and Vegas. She had many great memories of times spent with Tracy, Pearl and family at Craven, SK. The annual spring trip to Alberta to visit family, stopping to visit who Mom called "her other daughter" Dale (Marvin) along the way was always highly anticipated once bowling had ended. Her dream of going to Pearl Harbour in Hawaii was realized at the age of 89 and her most recent adventure was celebrating her 91st birthday at Disneyworld, Florida.
Mom had a licence plate "On the Road Again" and was a dedicated grandmother and fan at many of her grandchildren's sporting events. Mom enjoyed over 30 yrs. bowling at Quarry Lanes in Stonewall with Donna Riley and gang where Laurie affectionately nicknamed her "E.T."

Mom loved the Winnipeg Blue Bombers and even had her toenails painted in blue and gold. She always said she wasn't going to live long enough to see the Bombers win another Grey Cup, but was thrilled when they did last season. She cheered on the Winnipeg Jets and proudly wore her Scheifele jersey.
Mom's wishes were that there will be no service. If anyone wishes to pay their respects, they can do so at the Victoria Cemetery, Balmoral, MB, later on. In lieu of flowers, if friends so desire, a donation may be made to the Manitoba Firefighters Burn Fund, P.O. Box 45001, RP0 Kildonan Place, Winnipeg, MB, R2C 5C7.

Mom requested that the last line of her obituary should be words from the song by Tom McBride:

"you're going out the same way you came in"
Read Less

Receive notifications about information and event scheduling for Edna

We encourage you to share your most beloved memories of Edna here, so that the family and other loved ones can always see it. You can upload cherished photographs, or share your favorite stories, and can even comment on those shared by others.

Posted Jul 15, 2020 at 11:26am
I grew up with the Tarrant family and Edna was always one of my Mum's very best friends. My son Ian always looked forward to joining in on a visit with the 2 of them as he giggled over their endless stories. Edna was a sweet, caring woman that was always ready to step in as my second Mum if need be. Dennis and I will miss the surprise visits her and Tracy would make to Gimli for an always entertaining visit. She was full of energy and the love of life. Last night I had the most enjoyable visit with Tracy as we sat and reminisced about the good ole days........was good for the Soul. RIP Edna, you will be missed.
Comment Share
Share via:
T

Yes Lenore she always enjoyed the visits with them too. It was really nice to see you and Arlene and talk about the good old days. Thanks for the kind words ❤️🌹
NL

Posted Jun 20, 2020 at 10:51pm
I was very saddened to hear of Auntie’s passing. She will be greatly missed. Seems fitting she was the last of her generation to be born and the last to die❤️
Comment Share
Share via:
RC

Posted Jun 17, 2020 at 04:52pm
So very sorry to hear if Edna’s passing. Please accept my sincere condolences. I so enjoyed my time spent with Edna during our bowling in Tuesday afternoons. She was such a lovely lady and my inspiration She will be truly missed by all who knew her
Comment Share
Share via:
T

Posted Jun 17, 2020 at 03:00pm
Tracy, Miles & family, was saddened to hear the news of your Mom's passing. She was a wonderful neighbor when we lived at the Bull Test Station, and I thoroughly enjoyed seeing her or hearing of her from Tracy, over the years since. She was a lovely lady who always had a smile for everyone.
Comment Share
Share via:
T

Posted Jun 14, 2020 at 10:34am
On one of my last trips to Gunton, while having a chat with Aunt Edna, I’ll always remember her saying about how old she was, “Age is a number, and mine is Unlisted!” I was always inspired by her adventures especially in her senior years, I’m proud that she was my Auntie. My condolences go out to her to her family. Love Janice & family
Comment Share
Share via:
T 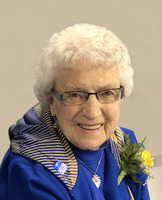