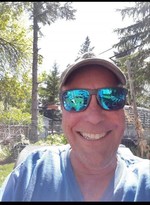 Dennis is survived by his mother Lorette; his father Norm (Carol), brothers Mike (Donna) and Thomas (Tracy); his sisters Patricia (George) and Catherine (Bill); his son Dennis Jr (Erin); daughter Brandie (Keith); step children Cassidy Kelner, Max Hughson (Holy), Jay Hughson (Niki), their grandmother Elsie Kelner; grandchildren Cheyenne, Shaylynn, Dylen, Darian and Macy; step grandchildren, Rachel and Reggie as well as numerous nieces and nephews.
Dennis was predeceased by his wife Brenda Lee Nixey and later on Karen Kelner. We would like to thank all the Nurses at Stonewall Hospital during his final days.We will sure miss his smile and laughter. A funeral will be held at a later date.

In lieu of flowers, donations can be made to CancerCare Manitoba, 1160-675 McDermot Ave Winnipeg, MB R3E 0V9.