To share your memory on the wall of Dale Carpenter , sign in using one of the following options:

Provide comfort for the family of Dale Carpenter with a meaningful gesture of sympathy.

After graduation from high school in Sioux Lookout, Ontario, Dale studied mathematics at the University of Alberta. After his first year at the U of A, Dale took a break from higher education and returned to Sioux Lookout. Always an avid outdoorsman, he spent a year as a guide for hunting and fishing parties. When Dale returned to the U of A, he switched to a major in Education, probably so that he could have summers off to fish.

Dale graduated from the U of A in 1974 and took a teaching job in Fort McMurray. At that time, McMurray was barely a spot on the map, with one stoplight. More importantly, however, it was situated in the boreal forest, which had great hunting, and is the place where the Athabasca and Clearwater Rivers meet, allowing for ample fishing opportunities.

In 1975, Dale met his future wife, Sharon. He taught 5A and she taught 5B, so it was obviously meant to be. Sharon remembers their first meeting differently, however. When she saw him in the staff room, bearded, smoking a pipe, and wearing a corduroy jacket with leather elbow patches, she assumed he must already be married with children. So she was more than a little surprised when he asked her out for a drink.

Theirs was something of a whirlwind courtship, despite Sharon’s misgivings about Dale’s predilection for decorating his apartment with beer cases filled with empties. They married over spring break in March, 1976, seven months after they met. Sharon and Dale were married for forty-four years.

Raechel and Josh were always glad that teaching gave Dale summers off to spend with them. The two of them have countless memories of time spent with him, fishing, learning how to ride bikes, going to the beach, and playing catch and tennis. There was only the occasional calamity, like when Raechel took her eye off the ball and ended up catching a perfect line drive with her face, much to Dale’s horror. Or the time that Josh, Dale, and some friends went fishing on the Athabasca and ended up stuck on not a sandbar, but a clay bar, making it impossible to push the boat off the bar without getting stuck, waist-deep, in clay. Eventually, their collective ingenuity prevailed, and they were able to rescue themselves using rope, a rock, and some good luck.

Dale also used his summers to cultivate his massive vegetable garden, constantly pushing the limit of what was considered a reasonable amount to plant. One summer, he harvested so many carrots, the only reasonable way to get them all clean was to use the washing machine. The carrots were spotless, but the washing machine didn’t fare so well. Another year, he planted 50 bushels of potatoes, and was so pleased by the outcome, he followed it up with 50 tomato plants. Raechel vividly remembers picking green tomatoes in the dark, trying to beat the frost, and to this day, hates the smell of tomatoes on the vine.

Dale was a lifelong fan of hockey. He played left wing throughout his childhood into his twenties, only stopping in his twenties when his knees gave out. Fortunately, his kids came around a few years later, and both of them are sure they could skate before they could walk. Josh started playing hockey when he was four years old, and for 15 years, Dale went to every practice and game possible, even the ones at 5 am. Dale’s love for the game extended to watching it, and Hockey Night in Canada was sacrosanct in the Carpenter household, especially if the Montreal Canadiens were playing. As the saying goes, there are hockey fans, and then there are Habs fans. Dale was a Habs fan.

Dale taught school for 31 years, seventeen of which were spent teaching grades 4 and 5. Dale was especially fond of that age group, and his students were especially fond of the camping trip he took them on every year. In 1990, he was asked to move to the high school to teach math, which allowed him to once again work with numbers, which he loved. As a high school teacher, he was particularly appreciated by all of the guys who had seen him at hockey games with Josh over the years; they all loved to talk hockey with him.

Dale’s family were an unofficial animal rescue society in Fort McMurray, much to his chagrin, with Sharon, Josh, and Raechel frequently bringing home animals in need of a new home. Most of them were eventually placed with families around town, until Sharon brought home a border collie cross in 2001. The puppy, barely bigger than a handful, was so fluffy he was called Cubby Bear, and he and Dale had a very close bond until Cubby died, fourteen years later.

Dale liked both to stay busy, and a good challenge, which was how he picked up a part-time job as an investment advisor. For the last ten years of his teaching career, he also developed a successful business, with over 125 clients at one point. He passed the Canadian Securities Exam on the first try, something few accomplish. Even after he and Sharon retired to Gimli in 2007, he maintained some of his close clients, and he did income taxes for friends and family, and several others.


There are so many more things that can be said about Dale. He loved occasions that brought the family together, especially when the family grew to include his daughter-in-law, Theresa, and his two granddaughters, Lux Ann and Gemma. He was a card shark, and could play a mean game of chess. He had an odd fascination for reality tv shows about survivalists, and Sharon used to tease him about missed opportunities. He had a dry sense of humour, and often said something hilarious at just the right time. Above all, he was never boring.

Dale was loved, and he will be missed.
Read Less

Receive notifications about information and event scheduling for Dale

We encourage you to share your most beloved memories of Dale here, so that the family and other loved ones can always see it. You can upload cherished photographs, or share your favorite stories, and can even comment on those shared by others.

Posted May 09, 2020 at 11:00am
Dear Sharon, Raechel, and Joshua, we are so sorry for your loss. We have many fond memories of Dale and want you to know that we are thinking of you.

Posted Apr 23, 2020 at 01:48pm
Mr. Carptener was my math teacher in the days when I went to Westwood. I have fond memories of him teaching us math, especially when we would get stuck. He would always say "Are you stuck? Do you need a boost?" and would spend time with you one-on-one to help you through the math equations. Needless to say, I needed a lot of one-on-one support, as math wasn't my best subject.

I know that others remember him fondly as well. I appreciated his humour, cardigans and love of hockey. My condolences to his family during this time.
Comment Share
Share via:
WP

Posted Apr 19, 2020 at 01:07pm
Dale was a strong supporter of the Alberta Teachers' Association, and in particular an active member of the Economic Policy and Sub-Negotiation Committees. He was highly thought of by his colleagues and we appreciated his contributions. I would like to extend my condolences to Sharon and his family.
Comment Share
Share via:

Posted Apr 16, 2020 at 10:59am
Condolences to Sharon and family,
I was a new teacher in 1988 at FMPSD and remember Dale as a strong fighter for teachers as a member of the NSC and EPC. I am thankful to have met him before he retired. He loved what he did in all areas of his life. Treasure the many memories you have during this time of loss.
Savi (Ramnath) Houldin
Comment Share
Share via:
N(

Posted Apr 16, 2020 at 12:20am
My condolences to Sharon and family.
I have wonderful memories of teaching with Dale at Dr Clark School. I went on a few Gr 4 camping trips as the teacher in charge of the girls. Students looked forward to the camping trip every year.
Comment Share
Share via:

Nancy, this is Raechel. Thanks so much for sharing that, and for the good wishes. I didn’t know that you’d gone on the camping trips! But I do remember seeing you in the staff room when I was there to see Dad when I was little. I always though you looked so pretty - you had such lovely shoes and clothes. 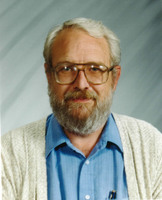